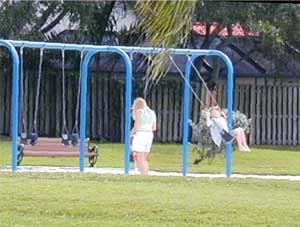 Part of the original Pine Island Ridge, the site covers about 50 acres and has an elevation of 20 feet above sea level which makes it one of the natural areas owned by the Town. The site has several archaeological sites on it and the southern tip served as a canoe landing for the Indians that lived in the area over 5,000 years ago. The site was cleared for cattle back in the 1950’s and the Town has started a reforestation plan on the site to restore some of the original canopy. Hiking, biking, or horseback riding along the many trails gives a unique view of the ancient but beautiful landscape and the natural beauty of the site.

The entrance to this preserve lies about one-half mile north of Orange Drive on Hiatus Road. It consists of 160 acres of pasture, equestrian trails, hardwood hammocks, pavilions, an equestrian facility, gazebo, and the original house that can be rented for special events.

The bells of Easter Hill mark the location where the Wray, Chaplin and Wood families who pioneered this area, celebrated Easter sunrise services in the 1960’s. That site now includes a gazebo for weddings and Sunday concerts in the Park.

Mr. Bill Robbins, the Park’s namesake, was a “gentleman” cattle rancher and citrus farmer. The oak hardwood hammock at the northwest corner of the site has been augmented over the years with ornamental plants that he collected when he was International President of the Rotary Club. The hammock is part of the “ridge” system used by the original native Indians for campsites when the surrounding areas were still everglades. A beautiful bridge was built across the canal bordering the west side of the Park to access the trail system to the west.

A famous tourist attraction at the corner of Flamingo Road and SW 36th Court is another spot along the trail. The original homestead of the Wray family, it is a botanical garden and horticultural enthusiast’s dream with exotic species of plants and trees from around the world. It is also a citrus farm with many varieties of fruit and a wildlife park. It has exotic and native reptiles, birds, and other animals in their wildlife habitat displayed throughout the site. It’s a great place to see, hear, and read some of the history of Davie.